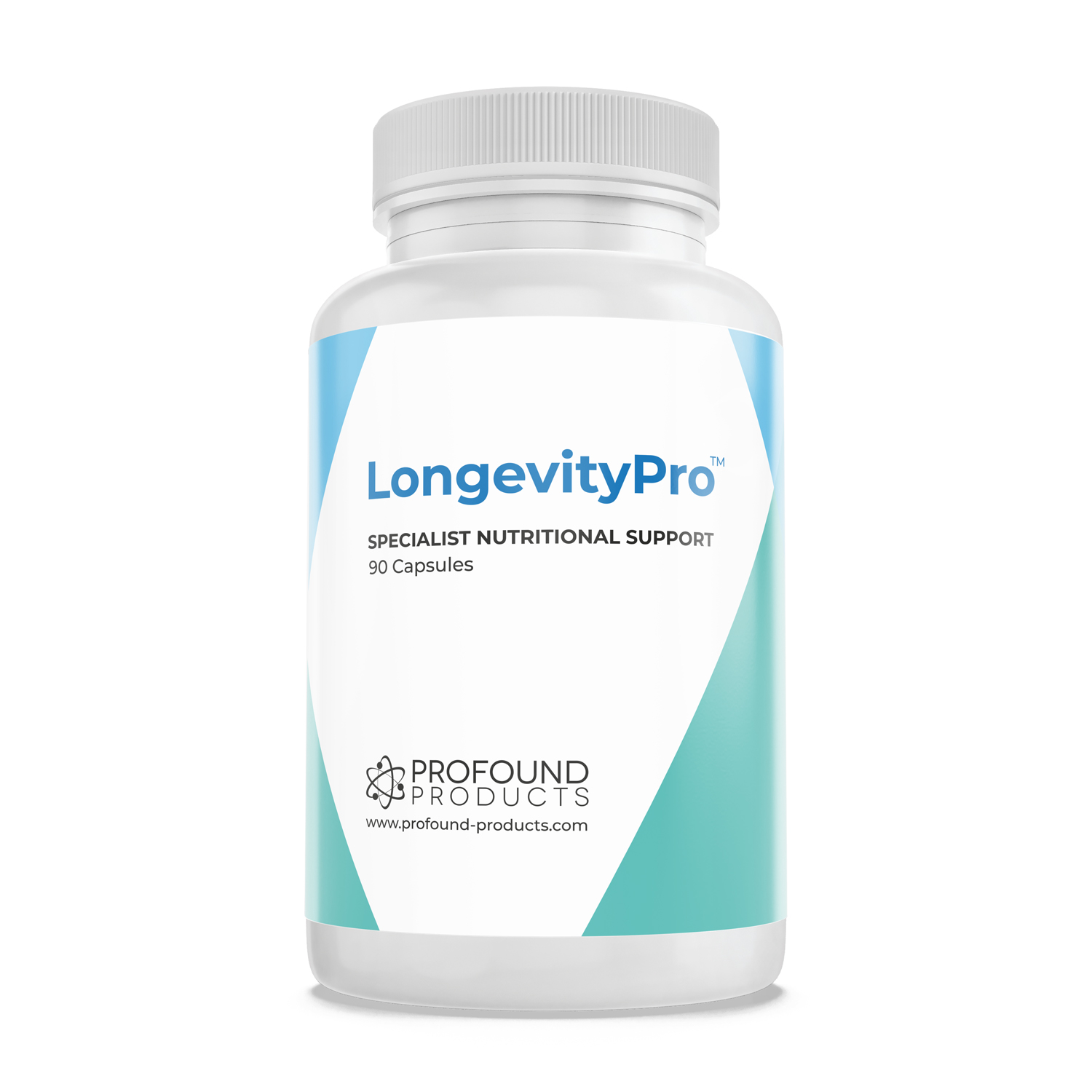 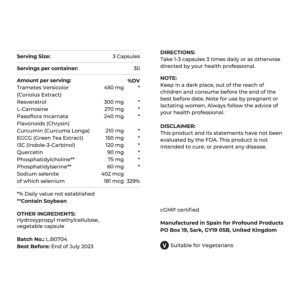 LongevityPro™ is a specialised nutritional support agent for those interested in life extension, and for those who have concerns with metabolic disorders.

Apart from its plethora of synergistic agents, LongevityPro™ is more convenient for life extension enthusiasts due to having 11 different key antiaging ingredients in one capsule to simplify your daily routine and is more cost effective.

The multiple agents work in their different ways (as described below) there are numerous pathways effected: enhancement of free radical scavengers (ie antioxidants) to combat oxidation, reduction of estrogen and improved androgen balances, reduction of cross-linked proteins and improved insulin resistance, plus enhanced immunity with antiviral activity.

There are several natural substances that have been shown to improve the lifespan of animals, and their health-spans. These natural ingredients have been combined into LongevityPro™ so that individuals can take advantage of their protective qualities.

Those who have concerns with metabolic issues, should also be aware of the protective and support qualities of LongevityPro™.

So, let’s look at the list of its ingredients:

All suitable for vegetarians.

So, what are all these individual items and what can we expect from them in such a package?

This Chinese mushroom is known to have potent immune enhancing properties and has even been noted to have anti-viral qualities.

This well-known flavonoid is a compound found in red grapes/ wine and it is noted as an antioxidant that forms a major part of the so-called ‘French paradox’. It inhibits platelet aggregation thereby improving blood flow/ supply and at the same time has useful anti-inflammatory actions.

There have also been studies that have shown resveratrol to reduce insulin resistance and prevent abnormal estrogenic action. It is even noted as a calorie restriction mimetic, that is to say that it helps to trick the body into eating less, a factor that has a strong following in the life extension community.

Carnosine is a di-peptide, (that is two conjoined aminoacids) and it is found naturally in dark chicken meat, plus it is found in dark green leafy vegetables.

Most of its published studies show how effective an anti-glycation substance it is, this means it can reduce cell protein damage, a type that occurs and increases in aging and even forms a theory of aging of its own, known as cross-linking.

Carnosine has immune boosting properties, and it is also known to inhibit lactic acid formation, (we all know this from the discomfort in muscles after exercise) and it can improve the oxygen levels in blood, plus it assists in an efficient mitochondrial function; these are the organelles in every cell of our body that produce the universal energy molecule- ATP.

Also known as the wild apricot or passionflower, its flavonoid components help to prevent abnormal hormone action, by binding to estrogen receptors, and therein improving several metabolism pathways. It is also recorded as helping to normalize androgenic factors and has an anti-anxiety/ placating effect.

Curcumin is the extract from the popular Indian herb of turmeric. It is noted as a potent antioxidant and has significant anti-inflammatory actions. It too can improve insulin resistance and it has been studied and found to reduce metabolic cell proliferation and their transference in-vitro.

EGCG stands for epigallocatechin gallate, it is the principal agent within green tea. Whilst it is noted for its antioxidant abilities, it has been shown both in-vitro and in-vivo studies to have various anti-metabolic activities.

I3C is an extract from cruciferous vegetables such as broccoli, Brussel sprouts and cabbage etc. It has potent anti-estrogenic effects by helping the body to excrete excess estradiol via urination. This action can provide protection in several conditions, and it goes onto inhibit the adhesion, motility, and invasiveness of some cell lines.

This is another prominent flavonoid found in grapes that induces cell apoptosis. This trigger for cell cleaning is useful in senescence, (i.e., the removal of dead cells via autophagy). Quercetin is also noted as an antioxidant and additionally, it can reduce cholesterol and in-particular the ‘worst’ kind of cholesterol which is LDL.

Selenium is known to be a significant stimulator and modulator for the immune system and has been shown to have protective properties in both in-vitro and in-vivo studies. Another significant factor for selenium’s beneficial actions may be related to its ability to ‘deactivate’ the toxin mercury by binding to it.

Phosphatidylcholine is a component of all cell membranes and it used for various purposes. It influences programmed cell death, (apoptosis) and it appears that some unwanted cells are particularly vulnerable to this substance- all because phosphatidylcholine can penetrate through their fatty membrane sheath that surround them.

Phosphatidylserine is an important agent that can be made inside the body but is mainly obtained via food. It has widespread functions in the body since it is part of the inner-cell membrane structure, and it is a key in the maintenance of healthy cellular function.

Take 1 to 3 LongevityPro™ capsules 3 times daily with or after meals. Whilst most folks will be comfortable with just 3 capsules a day, those who have real metabolic concerns will want to consider a higher dose- as indicated.

This product doesn’t have any reviews.

Only logged in customers who have purchased this product may leave a review. 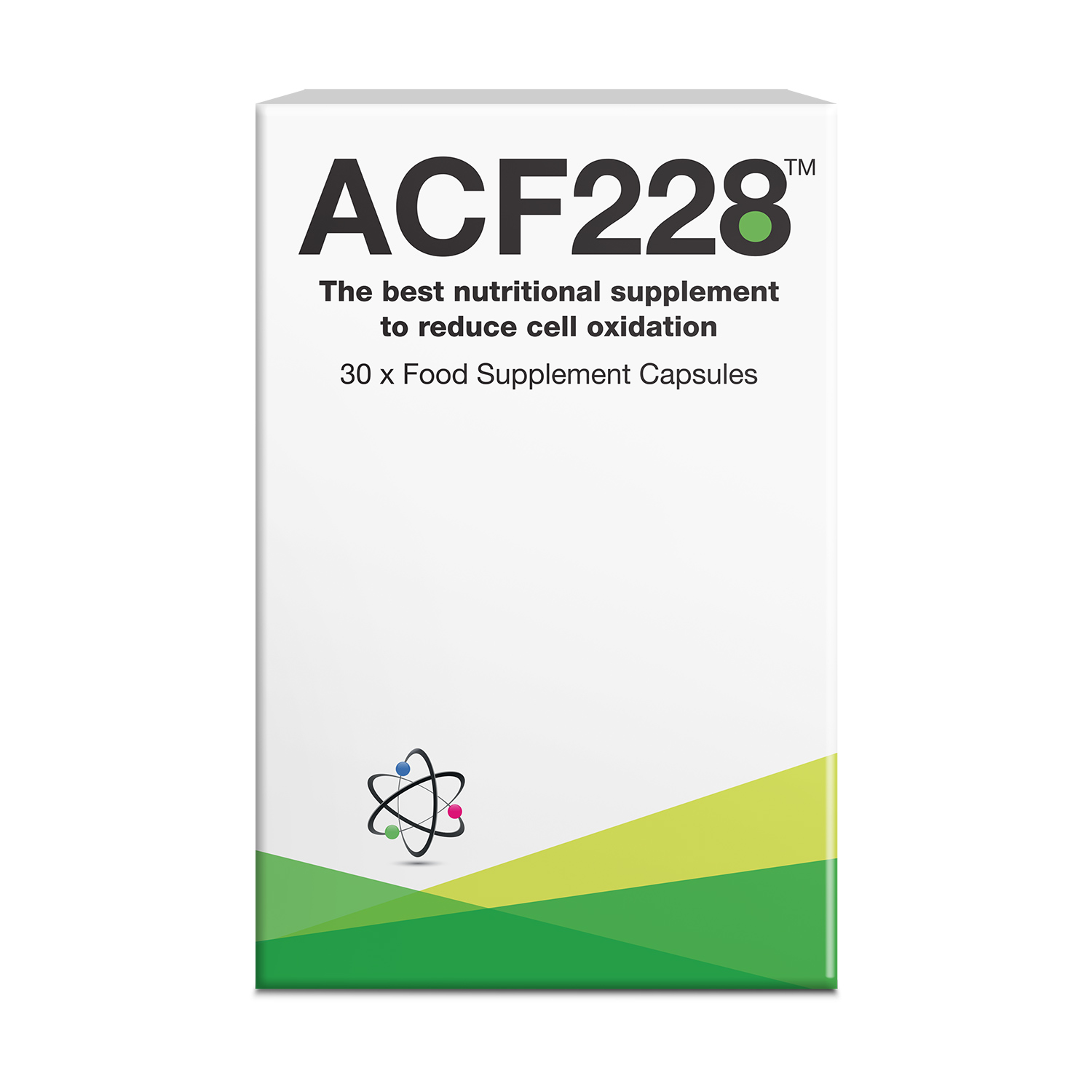 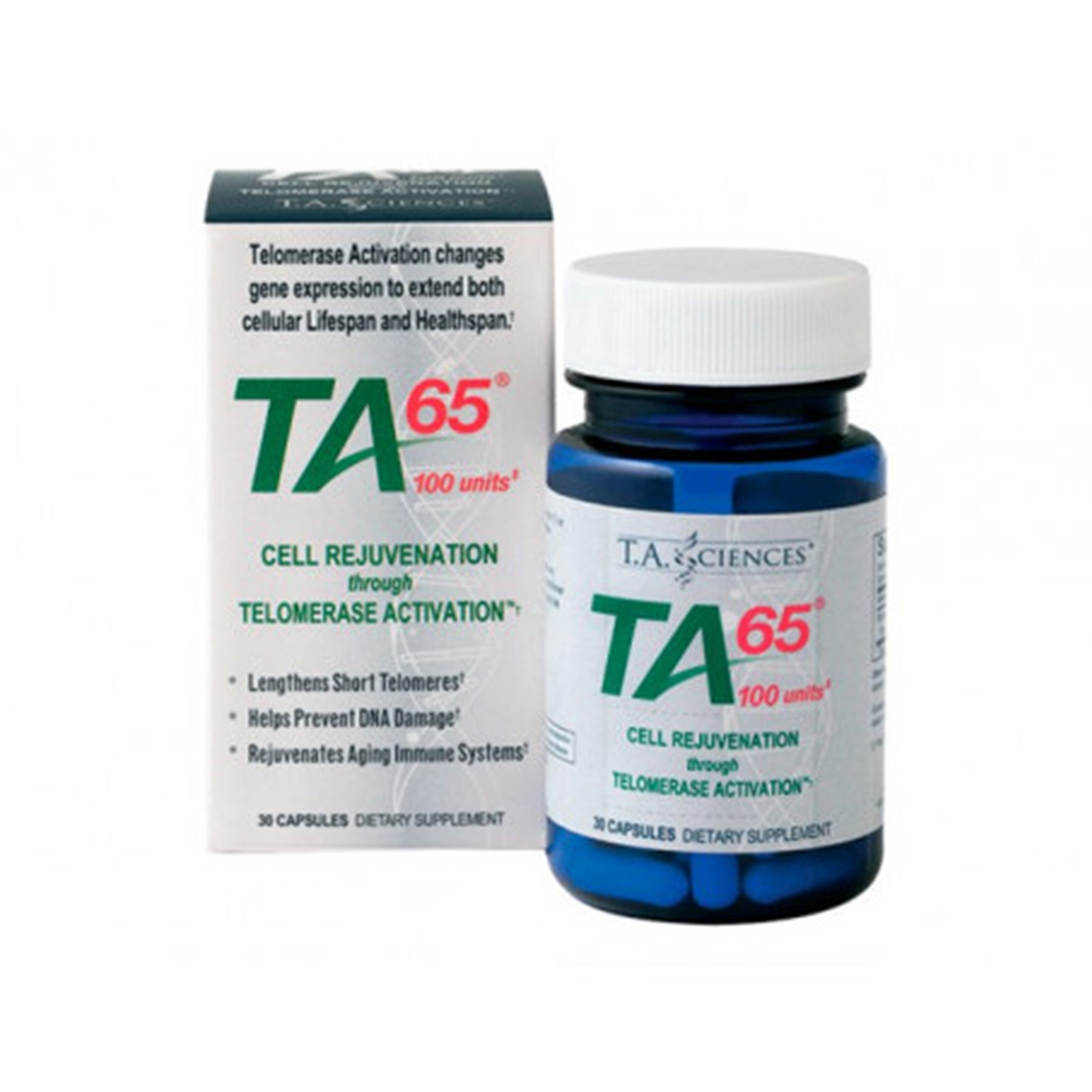